NEVER again will we see an Australian automotive dynasty like the one shared between Ford and Holden.

For much of the past century, the two marques have battled on the road and race track for sales supremacy. That duel has led to the Ford Falcon and Holden Commodore becoming part of our folklore.

Few families could say they have never had one of the two in their driveway over the past 50-odd years. Yet never both – families were staunchly Ford or Holden.

But the curtain call has sounded on the Ford Falcon. It will be first to exit the motoring stage when Ford Australia production ends in October 2016.

Ford is not alone, Holden and Toyota will also shut local manufacturing doors due to wide-ranging issues, including the strong Australian dollar, high labour costs here compared with overseas, changing buyer tastes and an intensely competitive market, with more than 60 different brands.

It’s an environment vastly different from when the Falcon was first launched in 1960. Since then, more than 3.7 million Falcon sedans, wagons and utes have been sold.

Back in the 1950s, initial plans had Ford looking at the likes of the Zephyr, Consul and Zodiac to lead its sales assault on Holden – which was dominating the market, partly due to Ford’s higher prices attributed to the import tariffs imposed on parts.

But when executives made a visit to Detroit in 1958, it was a pivotal moment in our history. There they saw the XK Falcon, which was launched in Australia two years later.

Under the bonnet was a 144 cubic inch (2.36-litre) overhead valve six-cylinder engine producing its 90 horsepower (67kW). It was able to reach 140kmh, about 10kmh more than the rival from Holden.

Challenging rough-and-tumble Aussie roads had a negative impact on the American-sourced XK variant, which quickly heralded suspension changes that headlined the XL’s arrival two years later. That led to a watershed moment in 1964, when the XM was launched with an Australian-designed body.

Yet it was the next model the 1965 XP which really put the Falcon on the automotive map with the 70,000 mile endurance run over nine days with 5 XP Falcons on the You Yangs test track.

“They created some damage on the cars but in the end they all finished,” said Dan Bowden, a proud Blue Oval fan and a member of the Bowden Car Care family, which owns some of Australia’s most prestigious race and road cars. “There were rollovers… the whole lot, but they kept them going and ran non-stop. It was crazy back then for a manufacturer to take on something like that with all these young testosterone-fuelled race drivers. “It was a crazy idea but they pulled it off. They did some really good work on those cars (XPs) and they became more ‘Australianised’ and they are a very different car from the American Falcon.”

For the true Ford devotees, the love affair began in 1967 with the XR GT. That’s where the performance heritage of the brand was formed, courtesy of a 225bhp (168kW) 289-cu-in (4.7-litre) Windsor V8 engine, sourced from the Mustang.

Winning Bathurst, it was the first salvo in the Ford versus Holden muscle car war. The Mountain ultimately proved to be a pivotal marketing source for both brands, when the old adage of “win on Sunday, sell on Monday” came to the fore. Back in the ’70s the vehicles in showrooms were not vastly different from those on the track – apart from the roll cage.

Part of the Falcon’s appeal was the whole family could go along for the ride. The RACQ’s Joe Fitzgerald also has blue running through his veins. “I recall childhood road trips, roasting on the white-hot vinyl seats of our XC Falcon, with some fondness,” he said. “But anyone genuinely shocked that the Falcon will soon cease to exist simply hasn’t been paying attention. “The relegation of the once-mighty family car market to an also-ran meant the days of producing a vehicle with little global appeal were always going to be numbered.”

Introduced in September, the Falcon made its debut initially as a four-door sedan, in both Falcon and Falcon Deluxe trims. The XK was essentially a right-hand drive version of the North American model. A wagon was introduced later that year. In May the next year, ute and van shapes arrived.

This model heralded a heavier suspension system and the Thunderbird roofline. Among the new additions were a top-of-the-range Falcon Futura sedan and the Falcon Squire station wagon.

This was the first Falcon with an Australian- designed body. Due to our poor road conditions much money was spent on improving the suspension and the taillights were raised. The front end received a full-wrap chrome grill and surrounds. A two-door hardtop body style was offered for the first time, in both Falcon Deluxe and Falcon Futura trim levels.

Known as the “Mustang-bred Falcon”, it was the first Australian Falcon to be offered with a V8 engine (previously reserved for upmarket offerings), a 4.7-litre 150kW Windsor unit. There were nine models. In 1967, the much-lauded GT arrived with an up-rated version of the V8, pumping out 168kW.

An underrated offering, it was a better car than the XR but it didn’t win Bathurst. It’s identified by a divided grille and inset driving lights for the GT.

Bolder styling, which featured raised ridges down each front guard and a “buttressed” C-pillar. A new dashboard and trim variations also appeared. Factory-fitted, fully integrated air conditioning was made available as an option for the first time. The GT variant gained a bigger V8, producing 291 horsepower (217 kW). The GT got a racing-style bonnet scoop, bonnet locks, and blackouts, as well as stripes along the full length of the car. The GT-HO was born. A homologation specially built for racing, HO officially stood for “Grand Tourer Handing Option” but its true meaning was “High Output”. The Phase I was fitted with the 351-cu-in Windsor V8, but was replaced a year later with the 351 Cleveland, producing 300 horsepower (220 kW) in the Phase II GT-HO, which won Bathurst with Allan Moffat at the wheel. They were a brilliant car for the era and created a cult following.

Featuring a range of external upgrades, with variations to grille and tail lights but otherwise unchanged bodywork. The six-cylinder motors expanded to 200 cu in (3.3 L) and 250 cu in (4.1-litre). A two-barrel carburetted version of the 351 Cleveland V8 was an option on all sedans. The XY GT and XY GTHO Phase III were iconic vehicles, particularly with the shaker on the hood making them look ultra-mean and they were truly a rocket-ship in their day.

With the United States stopping production, Australia made the Falcon its own but it still maintained a Mustang presence. This saw a new hardtop coupe derivative, along with frameless windows. While there was a XA GT-HO planned, concerns about public safety due to climbing top speeds (manufacturers had to sell 200 of the model to make them eligible for Bathurst) saw only three race cars and one road going Phase IV built before the program was scuttled.

With more aggressive styling, a stalk with indicators, high beam and horn, there was a new panel van and utility trim packages, “Surferoo” and “Surfsider”. Front disc brakes became standard across the range. This vehicle was well-known for featuring in Mad Max movies. GT models were still produced, and despite Ford pulling out of racing, Allan Moffat continued to campaign the Falcon with his own team.

Featured locally-produced Cleveland V8s and the cross-flow six-cylinder. A new dashboard was also introduced, along with new rear doors with a lower sill cut, air extraction vents in the rear of the C-pillars and larger bumpers front and back. In 1978, Ford also introduced a limited edition Cobra coupe following a one-two finish at Bathurst.

This generation was a major change in styling, with better body reinforcing delivering weight savings along with improved all-round performance. While there were early issues with this model, Ford quickly ironed out the problems. Helping boost the appeal was Queensland driver Dick Johnson, who was a privateer who won the hearts of Ford lovers around Australia. His first XD was written off after hitting a rock at Bathurst, but public pledges enabled him to get racing again and he returned in a new Tru Blu XD Falcon, that won both Bathurst and two Australian Touring Car Championships.

While this was the first model since the XP not to offer a V8, more than 278,000 versions of this model were sold making it the biggest selling Falcon in its 56 year history. Four-wheel disc brakes and power steering became standard in 1986.

Essentially identical, a key way to spot the upgrade was moving the Ford badge from the bonnet to the grille. The V8 returned with a 5.0-litre Windsor in the S-XR8. Series II EB arrived in April 1992 and introduced the S-XR6 and 25th Anniversay GT.

Ford introduced an elliptical front grille, while the sporting XR6 and XR8 got special quad headlamps. The Futura nameplate also made a comeback.

The Falcon got some curves and a redesigned interior, while a driver’s airbag was made standard on all variants – a first for an Australian car. The 4.0-litre six-cylinder was upgraded to 157 kilowatts.

Now regarded as ahead of its time, the AU embraced “New Edge” design. It wasn’t liked by many Australians, and two subsequent series delivered styling improvements with AU2 and AU3 models.

Resurrecting the popularity after spending about $500 million on a virtually all-new shape, the BA won a swag of awards and also featured a Barra straight-six 4.0-litre engine, along with a turbocharged (240 kilowatts) option. GT made a fulltime return to production with 290kw 5.4lt

It received various mechanical upgrades and improvements to cabin ambience via better levels of noise, vibration and harshness. There was also a Series II update in 2006.

The FG name paid tribute to Fairmont Ghia. It featured a range of improvements, while this also marked the end of Ford Performance Vehicles (FPV), making the final 500 351kw GT-F sedans in 2014.

Wearing the Ford Mustang face, it’s the final Falcon ever to be produced. It saw the re-introduction of the iconic XR8 with 335kw and two special XR6 and XR8 Sprint models with 325kw Turbo six and 345kw V8, but Ford promises this will be the last time the Falcon nameplate will be used. 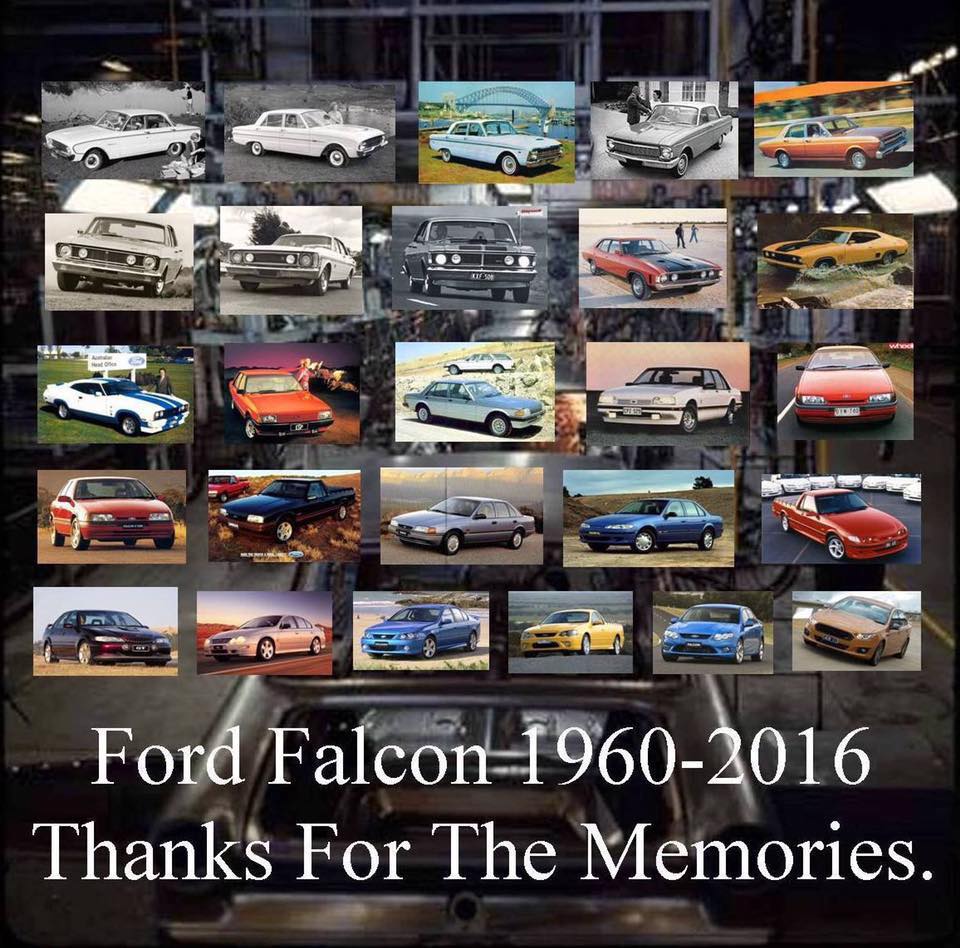