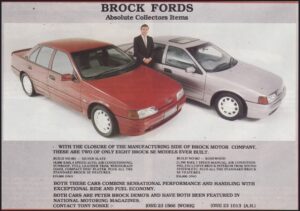 Did you hear the story about Allan Moffat racing Group A Commodores and Peter Brock building special Falcons while Holden enlisted a Scotsman to do Brock’s job?

For a while there in the late-1980s and early-’90s, the local muscle car world turned upside down, with old allegiances meaning very little when it came to survival in a world no longer driven by V8 engines and motorsport.

But the most amazing chapter of this time is one that few people know about: the period when Peter Brock turned his back on Holden and started building special Fords featuring the EA Falcon’s powerful new multi-point overhead camshaft six. The Brock signature on a Blue Oval product! Lift your jaw off the floor, and read on…

While Brock enhancing Fords was unexpected, the Bathurst champ’s first attempt at going it alone was an even odder deal. It involved Australia’s national wheat exporter after it was forced to become a de facto Lada importer to optimise its return on Aussie wheat exported to Russia.

Brock’s role was to rectify Ladas that reached Australia which in some cases meant completing their assembly; such was the communist commitment to quality! For Brock, it was a desperate bid to keep his Port Melbourne operation going after Holden pulled the pin in 1987.

Ladas missing wiring beyond the firewall and other nightmares may have kept Brock and what was left of his team busy, but it was a far cry from the heady days of racing and building hot Commodores.

As TWR’s HSV replacement for the Brock-HDT operation emerged as Holden’s officially-sanctioned partner, the vacuum in the Ford world was highlighted. In 1988, Ford’s situation was fundamentally different to Holden’s, the Ford arm investing heavily in a new local six with no V8 option while Holden’s only local engine was its V8.

With Jac Nasser – a certified petrol head – on the rise within Ford Australia, several local identities saw an opportunity to demonstrate their bona fides in the hope that Ford might be inspired to take on HSV with one of them as a partner.

This explains why the EA’s 1988 release generated a much wider than usual choice of enhanced models. One of the better ones was the SR3900 produced by APV, a group of former HDT employees. Dick Johnson also produced a superb one-off to show how he would do it, while Mick Webb’s history of enhanced SVO Fords ensured that his EA-based efforts were also taken seriously.

For Brock, the motivation was different. Brock’s Austech Automotive Developments, which was set up to enhance Fords from 1988, was a huge step that went well beyond the obvious switch from Holden to Ford. It demonstrated that, after the Lada distraction, he was back in town as a race driver and special vehicle manufacturer.

It also enabled Brock to show that he could establish a professional special vehicles operation on his own terms from scratch then deliver quality, fully-complianced cars that people wanted without clandestine factory backing and help. His Austech partner Alan Gow takes up the story: “Austech Automotive was set-up (in Coburg, Melbourne) and co-owned by both Peter and myself, after HDT’s Port Melbourne operation was closed-down. We set it up for a number of reasons. Holden made it virtually impossible for us to access any cars, dealers or parts to continue building Brock-modified Holdens.

“The race team had to move out of Bertie Street and relocate (to a nearby northern suburb about 15 minutes away). Because no one was doing any special Ford road cars of any consequence or in any great numbers, we considered there was an opening in that market, particularly as Brock was now racing Ford Sierras. We merely saw an opportunity.

“We took some of our key road car staff from the old operation and of course, the race team retained the same staff.

“There was never any official Ford blessing or involvement. It was a totally private operation set up between Peter and myself. Ford did not raise any objection to us doing so and nor did they put any ‘road blocks’ in the way.

“Understandably they were quite happy for us to do what we were doing and to have the Brock name associated with Ford. We established relationships with some key Ford dealers who would be official Brock dealers.

“Tony Noske (who had occasionally co-driven for our team in enduros) made overtures about buying the road-car operation so we sold the business to him. I then moved to the UK. Peter stayed on with Austech as a consultant and minor partner. However, the company only survived a few months before it was closed-down.”

Despite tiny production numbers, Austech was still one of the most successful Ford enhanced vehicle suppliers before Tickford arrived on the scene. But there was little chance of Austech or its Australian rivals becoming Ford’s official special vehicle supplier. After Ford Australia threw the brief open to global operations, it was the amount of money that prospective partners brought to the table, as much as any credentials, that would decide the outcome.

It was during this period that local boss Nasser became “Jac the Knife”. Forced to slash Ford Australia overheads to stop the Americans from closing down local operations, he was in no position to fund a local special vehicle operation. Instead he was on a mission to bring back the V8 and keep the Capri viable for exports.

At least one US and one other European company were in front of the locals. But the clincher for Tickford to get the gig was its willingness to use its own funds for the UK development of a hot Falcon six. It even came up with the XR6 name in a deal that no local contender could match. This was after Tickford’s UK management bought out the company, underwrote the development of the first enhanced Australian Fords and installed David Flint (who was one of their own) in Melbourne.

And so the Austech project was bookended in its founding stages by Brock’s Lada work and loss of the Bertie Street premises late in 1988, while the soon to be released XR8 at $10,000 less than Brock’s B8 Falcon and SE marked the end in 1990.

Although Brock, even in later years, remained committed to the Austech marketing stand that claimed each car was one of 500, the reality is well short of that figure. Thanks to the tireless work of Terry Walsh, who runs Brock Ford enthusiast website (geocities.com/brock_fords/) it appears that 126 examples were based on the Falcon and Fairmont plus the original EA prototype.

This was followed by just five of the final top shelf SE Falcon-based models before the company closed in December 1990, around the time that Ford was inviting submissions for an official enhanced vehicle supplier.

This meant that the Brock Fords covered all EA specifications including the 1988 original, the October 1989 EAII upgrade and the September 1990 30th Anniversary upgrade. This, combined with Brock’s ongoing improvements, makes locking down a definitive specification impossible.

There were at least 18 Fairlanes and 11 Mavericks (Ford’s rebadged Nissan Patrol) and up to five Telstar TX5 examples completed, although just one Brock TX5 Turbo is currently known. There was also a red ute based on Ford’s 1988 XF series which was used as a Shannons promotional and rally support vehicle, plus an EA GL wagon.

Austech’s mainstream model was the B8, Brock’s eighth generation of enhanced cars, hence the designation. The rhyming slang was warranted when it delivered power once the preserve of a V8 engine. The B8 ran from 1988 to 1990 and varied considerably in specification from the fairly basic first examples. All were based on the S or Ghia to get the full instrument upgrade.

As a road car, the B8 was judged outstanding from the start, and was often compared by the motoring media with HSV’s latest V8 models despite its six cylinder engine. Austech stuck to the tried and tested HDT formula to keep within the ADRs with extractors, special exhaust, blueprinted ignition, full dyno tune, free flow air intake and a sump full of Mobil 1 oil. It was enough for a claimed power boost from 139 to 164.5kW and was probably more fuel-efficient.

The exclusive 16-inch wheels were a classy rework of an existing CSA design that replicated the look of a European steel wheel. Bridgestone RE71 tyres were fitted with mainstream tyre pressures and not a polarizer in sight!

There were the usual fibreglass lower body extensions and subtle rear spoiler and a neat graphic that pre-dated the Tickford wings. For its time, it was every bit as professional as the VN ClubSport.

The interior had the usual Brock leather wheel, gear lever knob and boot and reworked versions of the standard seats with extra location and retrimmed by Paratus Industries.

In 1990, these packs plugged the gap created by the new Brock SE which was similar to the B8 with slightly different detailing including badging, pearl white wheels and several classy options including leather and a European wood trim pack unique to Austech. The SE came only in Rosewood or Platinum and an SE auto (upgraded by Ford to four-speed by then) in Rosewood was the last Brock-Ford built.

Within six months, in mid-1991, Nasser had his 165kW XR8 version of the Falcon S on the market for just $31,395 followed by Tickford’s XR6 (in late 1992) which blew its V8 rivals into the weeds for about the same money. Austech’s market evaporated.